10 Content Creation Strategies for Today, Tomorrow, and the Future

There's no doubt that, whatever your position and team, you worked differently in years past. Content creation processes were upended by shuttered studios, recalibrated expectations, and makeshift methods. Now that our workflow has changed, the question is, what will remain?

Thinking about the future of e-commerce, we gathered industry experts to chat about how brands and retailers created content during the lockdown. We looked forward to asking how these lessons change workflows, budgets, and scale for the future.

1. Contingency Is the New Normal

While, no, we don’t forecast every year to mimic 2020’s level of disturbance, we do believe that a good content creation workflow contains a ready-for-anything element for contingencies.

“We’ve all learned a new meaning of agility and contingency plans,” says Tara Geraghty, noting that a lot of prior strategies had to pause, and teams had to think merely about how to survive.

What’s the old adage, hope for the best and prepare for the worst? We think it applies here. So use technology that manages projects and tracks samples, even when work suddenly has to happen at a different locale and team members’ roles have to be reimagined by necessity. Create a structure that makes room for the unstructured. Surround yourself with a team of people who embrace creative workarounds. 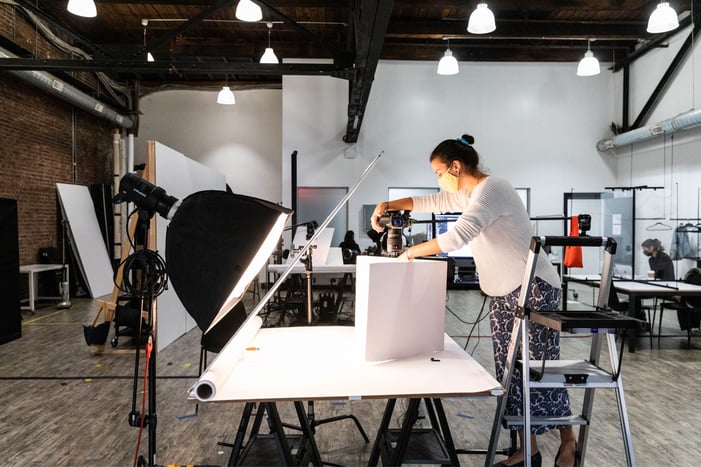 2. Leverage, Reimagine, and Trust Your Talent

A good contingency plan begins with a contingency culture on your team, and that culture requires trust in creative talent.

“I think the main takeaway from 2020 for us is that we've developed a much further trust in the team,” Stewart Honeyman says. “That sort of breakdown of barrier and allowing them to be more autonomous and really pull the business forward in such a trying time was great to see.”

Honeyman and Geraghty both shared stories of models shooting at home, sometimes with partners, siblings, or parents helping to execute the shoot. Carter-Ginn shared about a friend photographing for Fossil who, along with his wife, became a watch model by default. “Not something that I think that either of them expected to do, but you just do what you've got to do to make it work,” Carter-Ginn says.

Going forward, maybe it’s not time to return to hawkish oversight, suggests Devin Fisher. “Some of these teams are producing more content with less,” Fisher says. “Now there are fewer people on set, and that allows us to be even more productive. We don't have as many inputs.” Pre-2020 committee decisions and micromanaging mentalities now, with the benefit of hindsight, look amusing. “It turns out you don't need 27 people to sit there and watch the one pin-up get shot, you know?” Fisher says.

3. Diversify Your Spaces, Talent, and Method

A strong contingency plan will involve a lot of pivot possibilities. Can your studio take work remotely? Can you move in-house work to a freelancer or vice versa?

To Geraghty, the biggest takeaway from 2020 is clearly and emphatically summed up in a word. “Diversify! Diversify, diversify,” Geraghty exclaims. She recommends “having various models of production operation set up within your ecosystem, and being able to lean into them.”

Not every studio was so well positioned before the lockdown. “You have all these in-house studios that didn't have multiple locations. They can't maneuver,” Fisher says. “How do you generate content when you can't get on-site to that studio that was there? Now that shifts back into our network. So for us, it's a daily solution for all of our clients.” 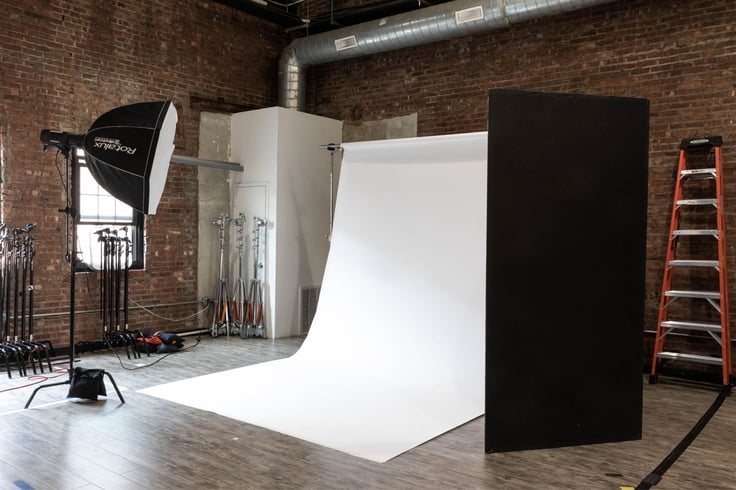 Fisher teased at it in the quote above. Part of the way you diversify is by having a strong network of industry peers, freelancers, and so on.

Carter-Ginn notes that you want to make connections that understand your voice and image. You’re better off “having that Rolodex, if I can use that now-archaic term, for trusted vendors, trusted partners, trusted freelancers that know your brand,” Carter-Ginn says.

We recommend making those connections now—considering it part of your contingency planning. Spreading your creative network to new freelancers and vendors, and to new regions, ensures that you can scale whenever needed and contort your workflow when hardship hits any one part of the globe.

The notion of scaling might sound daunting now. Because honestly, many of us have been satisfied to simply survive 2020 and its many workarounds. But as Carrie Crow notes, there’s now consumer demand for more top-of-funnel content, so your strategic plans for scaling start with catch-the-crowd content at the tippy top of your marketing initiatives.

“I think it's far more important now for brands to have a point of view and have something to say, and making sure that an e-comm or production-based team can do that upper-funnel, more deeply considered brand work, that the training is there, the talent is there in the team,” Crow says. “If it's not, make sure you get it there very quickly.”

As your talent uses informal methods and spaces to create content, including remote product photography with models shooting at home, their imagery has become more creative and relatable for consumers. Carter-Ginn suggests that this shot-at-home content provides an “aspirational but not unobtainable” feeling—functioning much like user-generated content has in the past few years.

“Before the pandemic, we looked to user-generated content to create that [approachability] for us, and now I think we've had to look to our own teams to be creative and inventive about content that's still relevant for the consumer but also sells the product,” Carter-Ginn says.

We see how a brand could supplement versions of user-generated content with in-house work that meets the same goals, providing fresh new content with a lot of diversity. Consumers can relate to the authenticity and neutrality of user-generated content and, as Honeyman calls out, your teams can replicate that by being “a bit freer, and [pushing] forward to be more creative,” noting that his “team has started to produce some of the most creative, efficient work that [they’ve] ever seen.”

7. Manage Expectations and Don’t Turn Back the Clock

So much of the message here is to embrace uncertainty—work in new ways, from new places, with new people. But of course, there’s more to it than putting on a vacation shirt, cranking the tunes, and rolling with whatever may come your way. Everyone, from clients to team members, has expectations on workload and throughput, and those should be managed in a healthy way.

For Crow’s team at Hello Fresh, that meant identifying people who could take account of the team holistically—“finding stewards around the business who could really agree on what the team could do, what was possible,” Crow says.

At JCPenney, Geraghty’s staff had expectations set early in lockdown through transparent conversations about energy levels, schedule conflicts, and so on. “I think for us, it was a real ‘get real’ moment,” says Geraghty, emphasizing that it was time to get past usual work niceties and be straightforward. “It was like, ‘Let's be real. Let's be real real. What do you need? What can we do?’” Those talks led to a schedule in which some people worked in the mornings, some in the afternoons, some on the weekends—whatever made sense for the team and its members.

Intuitive scheduling is something Honeyman found effective at PrettyLittleThing, too. “Instead of working a 9-to-6 day, we had to tell the team, ‘Come in, get the job done, and get out,’” Honeyman says. “That actually showed we can probably do it a little bit quicker, and that's great if we do need to increase capacity.”

One of the ways to set expectations, especially when in contingency mode, is to start by taking an honest account of projected content—seeing what can be created even in dire circumstances and what feels less realistic.

Crow found it useful to audit the work that her team does easily in normal times and map out what it would look like to make that same content in small, medium, and large scenarios. Having it drawn out helps a crowd of visual thinkers and serves as a tool to manage client expectations. For Crow, it was saying to clients, “Here’s what's on the table. Here's what's off the table. Here's the cost of doing this if you absolutely have to have it.” 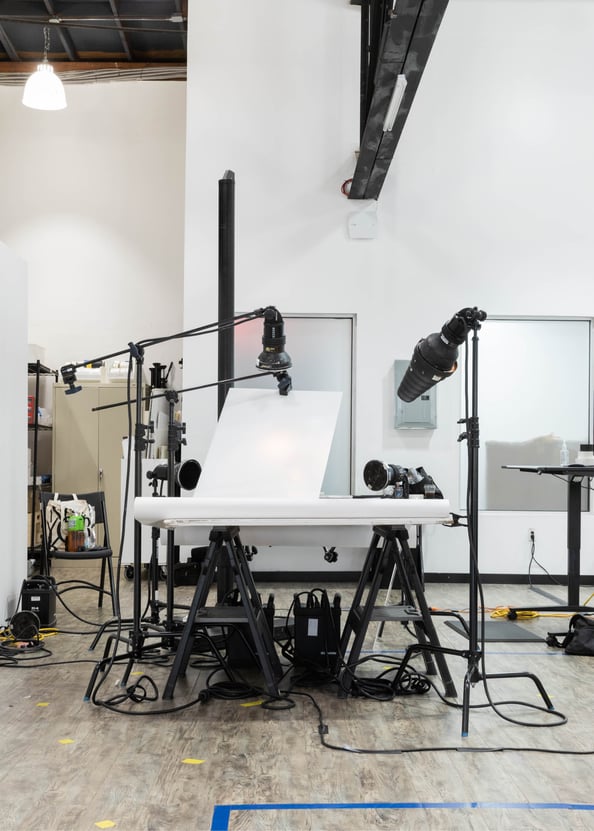 9. Utilize Metrics to Take Guesswork Out of Content Creation

Another way to manage expectations, especially in contingency mode, is to have software that gives you relevant metrics about your productivity.

“The best time to have started tracking your data was when you opened the studio,” Fisher jokes. “If you're not doing that now, it's going to be painful pulling off that Band-Aid, but do it—get that done. It empowers you to have discussions going forward instead of dreading that phone call. We all know, as leaders, it's great to have that data on hand to go, ‘Yes, absolutely. We did this many today, and this, and if we go tomorrow, it's that.’”

Having metrics is great in any condition, but when you’re facing disruptions and trying new workflows, it’s especially important, as Honeyman points out. “Because of the fact that we saw such substantial changes, we were like, ‘We've got to monitor this a lot more closely.’ So we did massively ramp up our ability to absorb different sorts of data metrics.”

You can be certain that we agree strongly here. One of the reasons we established Creative Force was to provide real-time data on your throughput and to help you prove your ROI to clients. Metrics are helpful in the best of times and even more so during chaotic times.

We couldn’t agree more. With that trial by error part in mind, we’re strong believers that you shouldn’t be afraid to fail. As Honeyman says: “We really want to motivate the team to just do it, just test and repeat. If it works, fantastic. We'll implement. If it doesn't, it doesn't matter. We're moving on to something different.”

As we learn to work in new ways, the most important thing is that we keep moving forward, continuously improve, and grow by doing.

Across the industry, how has 2020 affected our scale and strategy in 2021 and beyond? It’s led us to have fewer boundaries but more organization. We work in new places, with new people and evolving roles, and at different times. This flexibility gives us the elasticity to scale as needed. But the new way isn’t loose chaos. We compensate for fewer boundaries by having clear metrics and expectation management—discussions, audits, and software that show we’re doing a great job, even in the most bizarre of times.

3 Key Takeaways from Episode 4 of the Creative Operations Podcast.

What is Creative Operations?

If you've searched for a simple definition of creative operations and came up empty-handed or...