“A hallmark of creative production in the past has been emergencies and fires and people's hair on fire and running around and semi-organized chaos to get the things we need,” says Daniel Jester, host of The Creative Operations Podcast.

But for all the ways we glamorize disorder—hey, everyone, look how important we must be if we’re having to scramble around the studio at the speed of light—it’s not the way for our studios to make money (the ultimate goal, right?) or for our teams to preserve well being and maintain some semblance of work-life balance.

Daniel brings Aritzia’s David Hice back to the podcast, to reclaim and reassert an operations mindset in our studios. If you’re addicted to the fire drill vibe of your studio, this isn’t the pod for you. But if you’d like to make it home for dinner more often, stream the podcast on Amazon Music, Apple Podcasts, Spotify, or our website, or read the highlights below.

Go About Your Process With Intent

David has a beautifully simple way of describing the role that process plays in our studios. “Knowing exactly what you're able to do as you go into that day is part of this whole project management mindset,” he says.

It takes organization and honesty—some pragmatic realism. Figure out what background work and what upfront work needs to be done on each project, so there are no surprises, David says.

What does honesty have to do with it? Well, in the studio environment, it might include an introspection of what takes your team the most time to shoot, Daniel adds, so you don’t overestimate your team’s pace. It also means adjusting KPIs to fit the more trans-local nature of post-pandemic teams, David says.

“Going into a new space for fall-winter last season, we’d had a general understanding of what our KPIs were,” he says, but those numbers proved inaccurate because they had turned to freelancers across several locations to help in ways previously trusted to their Vancouver and New York content teams. That change, coupled with a move to a temporary studio, reset Aritzia’s KPIs in many ways, as David and his team put effort toward having consistent lighting, for example.

David is able to acknowledge that reset, and the need to return to more detailed projections because he knows the role that honest self-critique plays in a studio’s process.

“For us right now, it's definitely a work in progress, but we want to get to a place where we are super granular,” he says. “We want to know exactly that this model, with this brand within Aritzia, in this category can do 45 looks. We then repeat that for the next—for this category, this model can do 50 looks. This one can only do 25, or whatever it is—we want to get there.”

While changes up and down create the need to reassess KPIs, the very nature of having a self-aware process makes it possible to set those KPIs in the ebbs and flows of a studio’s workload.

“I'm super passionate about getting this process into a space that it can scale, whether that's explosive growth, like Aritzia—doing well and we need to continue to keep up with the demand that we're seeing in the photo studio—or in times of scaling back,” David says. “If your budget is cut, you want to put this process in a place and in a tool that allows you to scale whether that's up or down.”


Get People Who Say ‘Yes’ to Tech, Not Endless Requests

Part of staying on target with your process and KPIs is keeping your workload manageable—limiting it as closely as possible to expected, intended work.

That’s not always the easiest in this field. When managing people in studios, remember that their “yes” should sometimes still mean “no.”

“We don't want to over-promise and under-deliver,” David says. “Everybody is so willing to do creative because that's what they're there to do, that's what they're there to love. So if someone from the business comes in and says, ‘Hey, can you do this?’ The answer is almost always ‘yes.’ So us as project managers, us as creative operations, us as producers, kind to step in the middle and say, ‘That's not how we do things. Here’s how we do things.’”

The challenge is to take that receptiveness your team seems to have for endless requests and redirect it toward embracing technology.

David points out that studio creatives can be highly accepting of technology specific to their role or technology they’ve known, but they hold a general fear of new technology. “I think everybody's comfortable with their piece of the photo studio,” he says. “But when I talk about putting a process in a scalable tool that everybody can work in, all of a sudden everyone has to learn new software, learn this new tool, and it may not be something that they're completely comfortable with.”

But in order to take an operations mindset in your studio, you will want to encourage your team to say yes to process-oriented technology that helps them meet KPIs, not the random assignment requests that pull them from doing so. 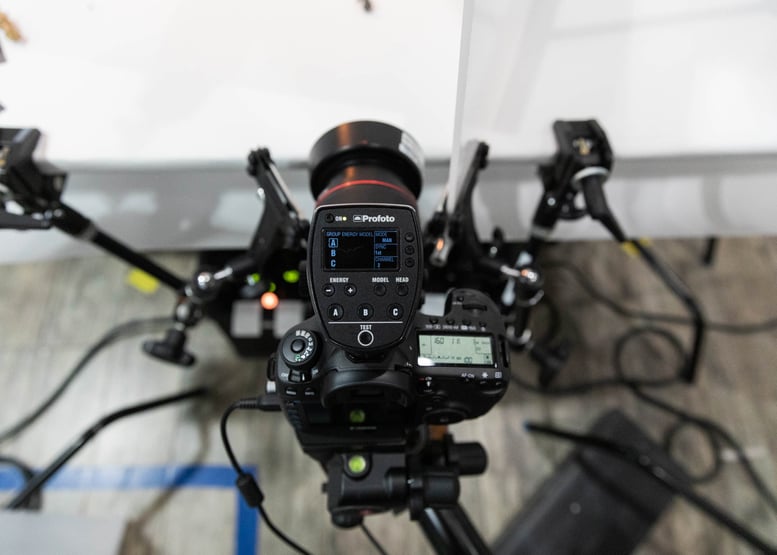 Find Tech Tools Your People Will Want to Say ‘Yes’ To

Having the right people in place matters, as does giving them a workable process, but you also need the right tools. David’s goal is to be very consistent about tech tools, so that part of Aritzia’s studio life is a mainstay even as they add people.

Espoused tech consistency aside, David is always on the hunt for tools—especially those with universal style guides and convenient collaboration features.

David confesses that he’s been frustrated with DAM options, which aren’t always the friendliest in their usability. He’s on a quest to find one designed for today’s users.

“I want to make sure that, one, it's user-friendly in a way people are used to with technology nowadays,” he says. “I think some of the DAM tools I've used in the past have just seemed outdated and not been super user-friendly.”

He’s been frustrated also by the manual nature of many of their aspects.

“If that's not in there, how much are people going to use the DAM?” he asks about the automated population of metadata. “Is it worth the investment? Of course, storing assets is one part of it, but making sure you can get those assets back out of there and ultimately to where they need to go, whether to the website or to a stakeholder who requested them or just having someone be able to search in there for something they need to post so they don't have to send an email to a creative and stop them during the day when they need to be retouching or shooting or whatever it may be— that's a big problem!”

You have a starting point for bringing your studio’s process, people, and tech into one direction that serves your KPIs. But for more of a primer and a good riff about how every content studio is now like its own media company, stream Daniel’s talk with David on Amazon Music, Apple Podcasts, Spotify, or our website, or read the highlights below.

Aritzia's David Hice tells us how to lead our creatives toward embracing efficient platforms.